So...I tell you all I'm going to get back into blogging & then I go two solid weeks without posting a thing. I HAVE to laugh at myself on this one...when am I not laughing at myself? But hey, it makes life more fun & entertaining!!!!

I tried to think everyday of why I am thankful & yesterday it hit me HARD that I was thankful for SEVERAL things! For example, I am SO THANKFUL I decided to buy some deodorant to have here at the office. I could have seen this as an embarrassing thing because I had forgotten to put it on yesterday morning; but instead I laughed at myself (see, I do it a lot) & literally thanked God for giving me the idea to place some at the workplace.

But I am ALSO very thankful for some major things. Like my boss will sometimes send me home from the office early just to take the girls swimming OR go spend time with them (a perk to being married to the boss).

My sweet, timid, apprehensive Kayla is also coming out of her little timid bubble...to an extent. She goes into her Sunday School classroom without crying & doesn't cry the whole time (MAJOR step for her). She EVEN went down to the front of the church (without any friends walking with her) to watch the Charlie & Mary puppet lesson at church). She has ALSO become MUCH braver at the swimming pool. Two years ago, she would not get into the pool unless you were holding onto her, even if she was in a float. Last year she would get in, but HAD to be right beside her & the world WAS coming to an end if she went under or got splashed in the face. This summer, not only will she get into ANY body of water with a lifejacket, she is TOTALLY fine to be without a lifejacket as long as she can touch. She will even swim under water (short distance) AND put her head under just because she wants to. I am SO THANKFUL God has helped us through those first few years. There were times I thought we would never see this day....I also GREATLY APPRECIATE all of you who reassured me along the way that this was just a phase.

I am SO THANKFUL Jamie is so loving & independent. She LOVES to cuddle & wants to give hugs & kisses ALL THE TIME (sometimes in the middle of dinner & then I think it's just cause she gets tired of eating, but I will take it!). And when she says I love you...you can see & feel the meaning behind it; AND it's usually followed up with I love you more & then I love you most. Everything is "No, I do it!". When she tries & figures out she needs help, she willing asks for help. She has NO FEAR in the pool. She does not like to be restricted by the float OR lifejacket; but has learned she gets more independence in the pool if she will wear them. Everytime (not that there has been that many times, but there have been some given her independence) that her head goes under unexpectedly (float flips over cause she's playing or she steps off the step at the pool without her float or lifejacket), she comes up, catches her breath & says okay let's play some more (this is a MAJOR change from child #1).

I am SO THANKFUL God blessed me with these two sweet little girls! 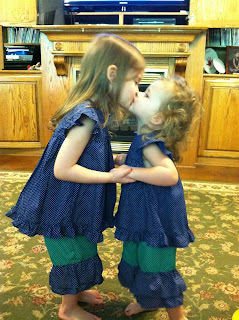