Wow, I was SO BUSY yesterday that I did not get a chance to talk much about September 11; but that does NOT mean that I forgot! I do hate that I missed some excellent teaching opportunities for the girls...but I cannot dwell on what I don't get done as a mother, just learn from it & move forward.

I was starting my junior year in college September 11, 2001. My college experience started at a private school & classes had not started yet & MOST students weren't even on campus yet. I was there cause I was on the dorm counsel for our dorm & the freshmen had already arrived; but they were all off on their Freshmen Orientation trips. So it was one of my last days of summer...I was sleeping in.

Momma (cause yes, I'm southern & that's what I call her) called & woke me up saying "turn on the TV, we're being attacked." Now I only have the GREATEST memory in the world because I write EVERYTHING down (this is ESPECIALLY true since I became a mother). I have NEVER written those words my Momma said down; but I remember them just as if he called me 2 seconds ago & said them. I remember every detail about that phrase down to her tone of voice. You see cause not only is she my Momma, but she's also my best girl friend. We watched together, via the phone, & talked about what would happen of the attacks spread close to us (my parents lived close to & my Daddy --yes, I still call him Daddy --worked at a military base; so I was scared).

The college had a meeting to inform us all of what was going on & get volunteers to man the phones...remember, the freshmen were on their trips & they weren't allowed to take cell phones; so we had parents who NEEDED answers.

I HATE (I don't use this word often, so know I'm serious when I do) what happened! I am SO THANKFUL God brought our Nation together after such a tragedy....but how in the world, what do I say, to explain all of it to my precious girls?!?!?! I want them to understand what happened & why Mommy wants them to be patriotic & wear patriotic clothes on more than just the Fourth of July. Any & ALL suggestions will be GREATLY appreciated! Kayla is 5 & Jamie is 2.

Given that yesterday was Patriotic Day & today was Wear Red to School Day...here's they are from this morning 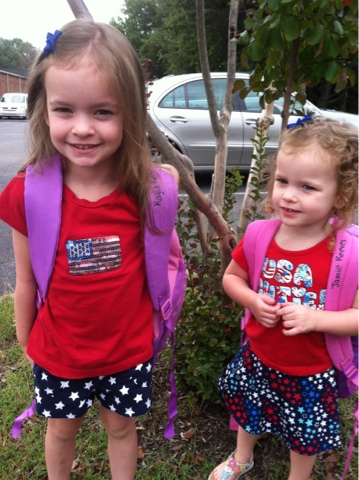