Have you ever been to a group therapy session or alcoholics anonymous meeting?
I haven't, but I've seen enough movies & shows about them to get the drift of how they start out, or how they are portrayed to start out according to Hollywood. Heck during my 7-week bedrest during the pregnancy with my 2nd child, I got addicted to Celebrity Rehab, a show hosted  by Dr. Drew that air on VH1. There's even a show on now called Go On that airs on NBC staring Matthew Perry. I watch the premier & it seemed like it would be a good show. But I decided not to get into that one cause I don't watch too many TV shows anymore & I didn't want to get addicted to another one. Oh, I got sidetracked.
Anyway!
So here's what I'm imagining: Everyone walks in, trying to blend in & not make too much eye contact. Some may or may not take part in the snacks (I would totally hit up the snack table cause I love food). And at the official start time, the therapist or director/leader (sometimes a person recovering whatever we are all meeting for)﻿ tells everyone to find a seat & everyone does. Some are thinking, heck I don't have a problem! I'm just here cause I was told I had to be here. Others are like, I know I have a problem & they own up to it & are ready to figure out how to fix it.
Well, for this blog post I'm participating in a blog hop that is similar to this group session. I recently started an Online Bible Study (OBS) on this book: 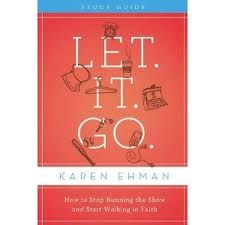 Let. It. Go. How to Stop Running the Show and Start Walking in Faith by Karen Ehman
This OBS is hosted by: Melissa Taylor
I tried to participate in Melissa's OBS for Unglued, but I got really distracted & behind & just ended up rewriting the book with some of my own thoughts & experiences. It was a great book!!!! {For those of you who follow me a lot, I will get back to Becoming More, but I really wanted to participate in this OBS.}
Let.It.Go. How to Stop Running the Show and Start Walking in Faith gives you practical tips and ideas to letting go of your need to control.  Between housework, meals (okay, I don't cook much but I do some), kids, & a job if we work outside of the home; we women have a lot to control. We are wired to do so (it's like we're born with a control gene). As Karen points out, "The problem lies with our failure to know where to draw the line, to differentiate between leading and bossing, to know the difference between simply taking charge and ultimately taking over."
I hope through the course of this 6-week study I will be able to let go of those items I hold so tightly onto and solely rely on God to direct my steps. I hope to "determine the difference between being conscientious (our part) and being in control (God's job)" as Karen points out.
So here's my Controllers Anonymous Meeting introduction (sorry it's kind of lengthy):
Hi, my name is Tasha & I have a tendency to control. I tend to alter between being agreeable & easygoing at times &, in some situations, wanting to take charge. I'm a people pleaser. I also tend to worry. But I have hope & so do you! I want to let it go & let God.
Posted by A Sunshine Day at 6:53 AM

Email ThisBlogThis!Share to TwitterShare to FacebookShare to Pinterest
Labels: Let. It. Go.