What's In A Name Link-Up & More 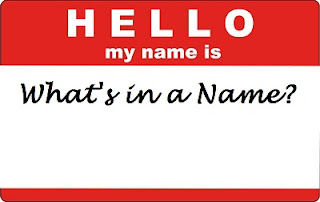 I am linking-up today with my new blogger friend Amanda over at:

She loves discussing baby names & is currently surrounded by pregnant women. So today she is doing this Link-up to discuss baby names. Now, she's not just referring to our human babies; she wants to know about about fur babies too! I'll discuss all my babies names in the order they entered the family.
Abby Doodles 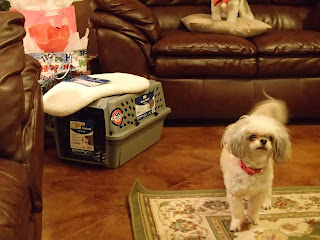 We got Abby when the hubs was still in Optometry School & I was in Graduate School. We were 1 year before being out & I was ready for a baby. But ya know, when you're surviving on a Graduate Assistantship & help from your parents, that's really not time to have a baby. So we got Abby & I DEFINITELY treated her like a baby {she really has no clue that she's a dog}. I was a little obsessed with the show ER (yes, I miss that show). We liked the name of one of the characters: Abby. So that's how she got her 1st name. Doodles comes from the fact that she is part poodle.
Kayla Grace 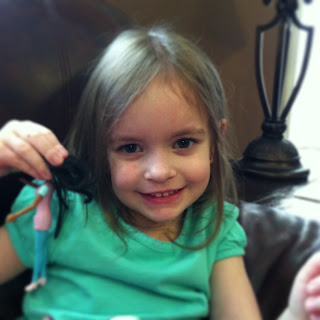 Let's talk middle name 1st...every first-born son in this line of the Reeves Family has the middle name of Elton. So when we found out we were pregnant, we started discussing names for both genders. Elton was a given if we were going to have a boy, but if we were going to have a girl, we were going to give her a middle name from my side of the family. My Mom's Grandmother's middle name: Grace. Once we found out we were pregnant with a girl, we started discussing 1st names. We really liked the name Layla.....but ya know, kids can be cruel as it is with making fun of their peers. I wish our world was not like that, but it is. We started thinking about where that could go, so we decided to do a variation & both agreed on Kayla.....hence the name: Kayla Grace
Jamie Lynn Acie 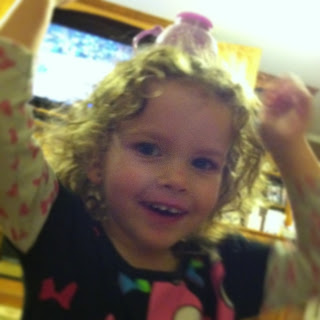 Let's talk middle name 1st...well, you already know what the middle name would have been had we had a boy. But when we found out we were pregnant again, we started talking middle names again since it's a family thing. Since Kayla's middle name came from my side of the family, we decided to look to the female side of the Reeves Family for a middle name. There are several females with the middle name of Lynn, so we went with it. When we found out we were pregnant with another girl, we started discussing 1st names to go with Lynn. We really liked Brooke Lynn, but thought that might just turn into one name. Now, I know there is a famous Jamie Lynn out there with the last name of Spears, but we just really like how Jamie sounded with Lynn. Out Jamie Lynn is not named after the famous one, we just really liked it! Two weeks to the day before Jamie was born, Greg's Grandfather passed away. So we also decided to include his middle name as part of her name. He was so looking forward to meeting her, but just was not able to. Hence the name: Jamie Lynn Acie
Tessie 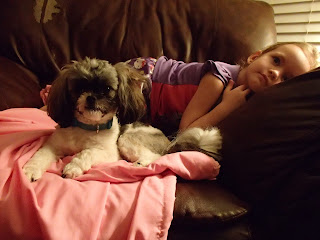 And last, but certainly not least, there is Tessie. The girls were asking for a puppy. It had been discussed with Kayla that she could have a puppy if we could go the rest of the school year without crying {this was becoming an issue as Kayla cried everyday while at preschool & did not play with friends}. She started quickly getting rid of this behavior, so we talked to Santa & Tess was delivered to our house. Santa had already named her, but we turned it into Tessie....since we have an Abby, it just kind of worked. Every once in a while, when we're calling Abby Doodles, we'll say Tess Aroonie. Not sure why, but it makes me giggle. Poor thing doesn't have a real middle name.
-----﻿
Is anyone else as excited as I am that I will NOT be blogging about an illness today, other than to say: we are feeling better!!!! 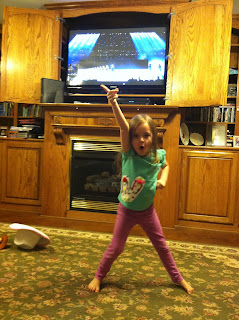 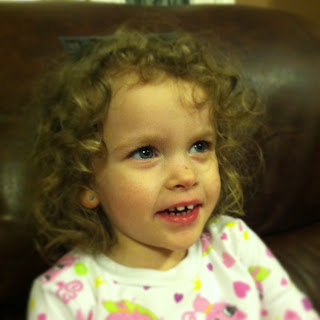 Jamie is all smiles again! 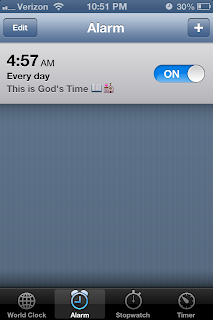 And this morning I was feeling back to getting up at regular time so I could have my Quiet Time with God. 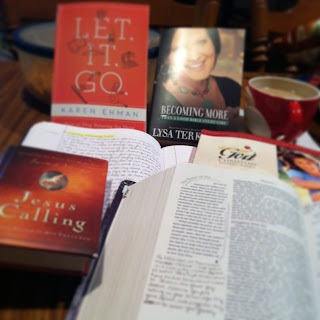 This is the best hour & half of my day. I may not get to everything you see in this picture, but I get so much from God out of what I do get to.
-----﻿
And by the way...I've decided to do a giveaway! As soon as I get to 25 stalkers followers, I'll do it. Not sure yet what it will be, but I'm thinking on it. I'm up for any suggestions of what you guys might like a chance to win. Other bloggers have given away $15 gift cards to different places or cute accessories. Now to be a follower, you can't just read my blogs, you've got to follow my page over on the GFC (Google Friend Connect). BTW, it's free! And since I know my 14 followers aren't viewing my post 47 times, some of you folks should join! You don't HAVE to blog to be apart of GFC, but it's fun. Blogging is FUN!!!!
﻿
Posted by A Sunshine Day at 3:59 PM