It's that time of life again....you know, potty training.

We are OFFICIALLY there with Jamie. But I'm doing it SO MUCH differently this time around. You see, Kayla spoke & understood at such an early age, that I thought we could potty train early. But boy was I ever wrong. We went to pull-ups around 18 months (the minute she started showing any interest); & stayed there for about a year. She just was NOT truly ready.

So I decided early on....like while I was pregnant (for those of you who don't know or don't remember, I was on bed rest for 7 weeks due to preterm labor; & THEN Jamie stalled for 3 weeks till I had to be induced. So I had A LOT of time to think)....for Jamie we were truly going to follow the advice: don't rush her, she'll do it when she's ready. When she has shown interest, I've asked if she wanted to go; but have NOT pushed like I did with Kayla.

Over the last 2 weeks, she has shown a little more interest; but I still haven't pushed the issue. Well within the last 48 hours, SHE has become a VERY determined little monkey. She has EVEN asked to go at preschool AND while we've been out in public (something Kayla would FLIP OUT about). You see, she wants to wear big girl panties like Kayla & she's been told she can't till she's potty trained. AND, candy (which isn't consumed much in our house) is the immediate reward. Jamie has discovered that she REALLY likes to get 2 Skittles or Reece's Pieces or M&Ms for something that she has control over.

When I left the house at lunch, she still had the same dry slip-on diaper (WAY more for your money than pull-ups) that she put on this morning. You may hear her refer to them as her Tigger cause that's who is on them.

Now, I KNOW we will have accidents & that we are not COMPLETELY trained; but it is starting off WAY better this time around. Just pray that I will still have patience with her & let her do this at HER pace. If you're around us & we keep having to excuse ourselves, PLEASE don't think we're trying to be rude; we're just in that season of life. 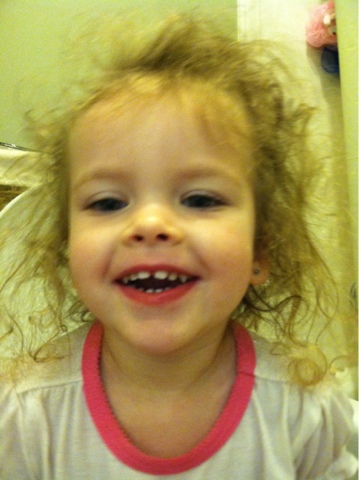