AKA: Almost 6 Full Days of Celebrating 2 Birthdays, Thanksgiving, & Temps Dropped
I'm just as shocked this evening as I was this morning that I have not posted a Blog Update! Why this is surprising me, I have NO CLUE cause we have been some busy people. If you are my friend on FB, then you have noticed this given all of my statuses, check-ins, & pictures. I won't repost ALL the pictures, but I'll give ya some highlights.
Greg & I both celebrate our birthdays in November, 4 days apart. It turns into A LOT of celebrating! The Friday before Thanksgiving, Greg's parents were going to take us to Texas de Brazil to eat before taking us to the Memphis Grizzlies game. However, my father-in-law works at a corporation that was involved in union contract negotiations. These things were ALL WEEK LONG & we didn't even know if he was going to get to join us at all that night. So instead of him missing out on a GREAT all-you-can-eat meat dinner, we went to 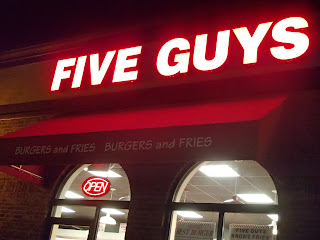 It was my first time there & I LOVED it....SOOOO YUMMY! We then went to the game. The undefeated Memphis Grizzlies beat the undefeated Knicks! It was EXCITING to say the least.
Saturday was Greg's actual birthday; so the girls & I baked Greg a cake for his birthday. 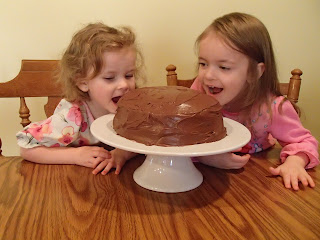 They did everything except crack the eggs, put the cake in the oven, & take it out. It was a Golden Butter Recipe 2-Layered Round Cake with Cream Cheese Icing between layers & Chocolate Fudge Icing on the outside. It was my 1st attempt at this type of cake & it turned out pretty good. Greg wanted Chili Verde, but didn't want to cook. So he trusted me (this took A LOT on his part since he's the cook in this house) to follow the recipe. 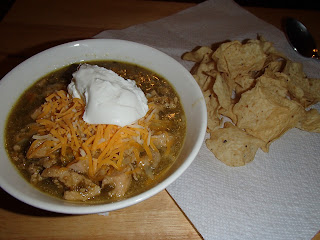 This also turned out pretty yummy! I like to add cheese & sour cream to my personal bowl & eat it with scoops chips.
Sunday we let the girls pick where they would take Greg out for his birthday. They picked Huey's! 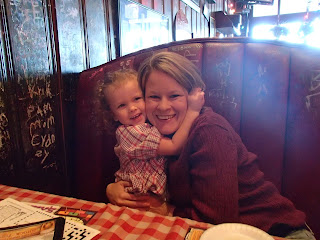 I love my booth buddy! Of course it was yummy!
Monday night Greg & I went out for my birthday dinner to 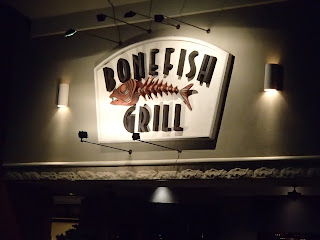 It was DEFINITELY yummy! Afterwards I got to see the new Breaking Dawn Part 2 with my friend & her family while Greg went to go see Taken 2 (I haven't seen the 1st one so I would have been TOTALLY lost trying to watch it).
I don't remember what we did on Tuesday....that's why I said almost 6 full days of celebrating 2 birthdays.
Wednesday was my actual birthday, so after taking the girls to get their picture made with Santa Claus, we went to eat at one of our FAVORITE places to go as a family: Hooters! 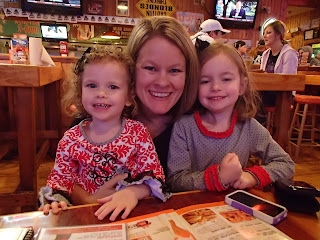 I KNOW this is a place where the waitresses do not have the best outfits (my guy friends would probably disagree)....but I LOVE their food! I didn't want ANYTHING as a dessert for my birthday since we STILL had cake left over AND I knew there would be desserts for Thanksgiving, but I got one anyway 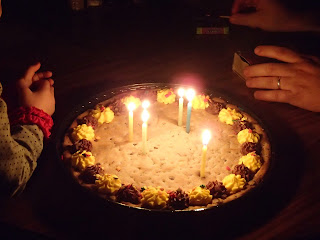 Thursday was OF COURSE Thanksgiving! With all of these great cooks.... 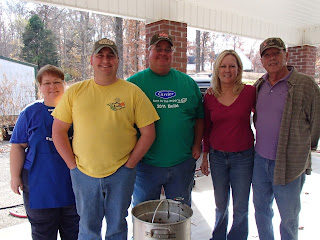 ...we had some GREAT food! We had fried turkey, smoked pulled turkey, mashed potatoes, green beans, baked beans, sweet potato casserole, homemade cranberry sauce, yeast rolls (that didn't rise, but I'll fix that SOON), lemon pie, & caramel apple cobbler. I was DEFINITELY full after all of that.
Friday we decorated for Christmas! 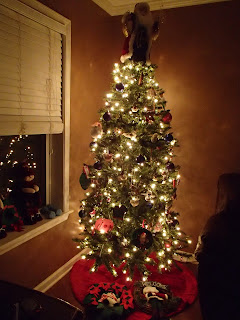 Saturday & Sunday we had some days of relaxing cause Kayla had started developing stuffiness & fever in the middle of all of that. I DID worked on some cleaning/organizing projects around the house. By Sunday night, Kayla had been battling a fever, that came only in the evenings, for the 6th night in a row. So Monday, I took Jamie to Preschool & then Kayla to the doctor's office. She was diagnosed with a real bad sinus infection & red ear (borderline ear infection) & prescribed an antibiotic.
Today (Tuesday) is the first day I had been at work since LAST Monday....yea, the one before Thanksgiving. So I was a little behind, to say the least. We were also VERY busy! I am worn out & during dinner, we were greeted with a fever from Jamie. She has been a little stuffy during this (& gave me some nice, thick, green-tinted junk from her nose). So I'm not completely shocked by the fever showing up. I am just EXTREMELY thankful that neither girl has acted like they have felt bad with the fevers. She'll be getting an antibiotic tomorrow (there are a couple of perks to her having a Daddy who can write prescriptions....IF she were complaining of ANYTHING not feeling good, we would take her to the doctor; but she says she feels fine). My gift coming from her nose that appeared this morning was gone by lunch time.
So through all of this, I have been lazy with my blogging....and lazy with my working out. So I'm a little scared of what the scale is going to say when I weigh-in on Friday morning. I did okish with my portion control during all of this, but not great. I will be happy as long as I did not gain more than 5 lbs. I had planned on doing some working out tonight, but I am cold & can't seem to get warm. I know, you're all thinking "if you would work out it would help you warm up". But I'm lazy, worn out, & cold so I'm going to stay wrapped up in my blanket. I'll have to resume work outs another day.
﻿
Posted by A Sunshine Day at 7:53 PM