What Kind of Unglued Am I?

Today's Unglued Blog
Lysa says I need to answer these questions in order to really face up to my raw emotions:
Am I an exploder?
Or am I a stuffer?﻿
Just as we all know, emotions don't sit still. 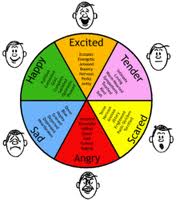 They are active -- & they travel. We can flow very easily (and sometimes quickly) from one to another. I need to know where mine are taking me so I can understand why I sometimes come unglued.
I need to define myself not for the purpose of labeling, but for identifying, for naming what is true (& there is a BIG difference in the two). Labeling says, "I am a sum total of my difficult issues." Identifying says, "My issues are part of the equation but not the sum total." It's healthy and productive to identify the issues that cause me to react badly [have head-spinning moments] when I am stressed, irritated by people who get on my nerves, stuck in conflicts, feeling hurt or causing hurt, at the mercy of raging hormones, or drenched in my raw emotions.
The identifying process is simple at first: people become unglued & react in one of two ways, either exploding or stuffing.
Exploding means pushing raw emotions outward. The telltale sign of being an exploder is not the decibel level but having reactions that feel good in the moment because it gets the yuck out. But when I realize how I've spewed on others & the hurt we've caused, the regret falls heavy.
Stuffing means pushing emotions inward. I swallow hard & lock my hurt feelings inside, not in an effort to process & release them, but to wallow in the hurt. I coat the issue with more & more layers of hurt until it forms a hard rock of sorts. It's a rock that I'll eventually use either to build a barrier or to hurl at someone else in retaliation.
So there are actually four categories of unglued reactions I need to learn about:
Exploders who shame themselves
Exploders who blame others
Stuffers who build barriers
Stuffers who collect retaliation rocks
Can you see yourself in any of these? I think with different situations, I can fall into all four categories. Next time I blog about Unglued, I'll go into a little more detail on these four categories.
Posted by A Sunshine Day at 6:03 AM

Email ThisBlogThis!Share to TwitterShare to FacebookShare to Pinterest
Labels: Unglued