Well, what a weekend?!?!?!
Friday
The boss loaded up with his Dad & buddies at 5am & went to Missouri for their annual hunting trip, PLUS my co-worker wasn't here; so this girl sat & did a lot of NOTHING at work. ﻿Jamie battled her croup AGAIN Thursday night, so the interrupted sleep AND just sitting around made for a VERY worn-out Momma when I got home from work.
So imagine how blessed I felt when I got home & my mother-in-law had done MOST of the cleaning I needed to do. Since I was so worn out & didn't want to mess up my freshly cleaned kitchen, I loaded the girls up for a trip to Sonic [in Oakland cause we don't prefer the one in Somerville]. I had the Chicken Club Toaster with Tator Tots & Diet Vanilla Coke (which was ALL yummy)....& I practiced portion control! Kayla got a Wacky Pack with a Cheeseburger, Ketchup only, Tator Tots, & Ocean Water. Jamie got a Wacky Pack with Chicken Fingers, Tator Tots, & Sweet Tea. Their Wacky Packs are either this, or with a hot dog. My LOVE for Sonic Ocean Water has DEFINITELY passed on to Kayla; but not so much with Jamie. When we got home, I did the little bit of cleaning I needed to do while the girls supervised & watched a little TV before we all went to bed. Mommy got a REALLY BAD migraine after cleaning with a product that had bleach in it & not ventilating the bathrooms (I am typing this out to help remind me to OPEN THE WINDOW when I clean with bleach). So I couldn't fit anything else fun in for the night & we went to bed.
Saturday
God blessed Jamie (& Mommy) with a FULL night of sleep! I praise the Lord that her croup did not flair up Friday night (& hasn't since Thursday morning). Now, I CAN & HAVE (MANY times) function with little to no sleep &/or interrupted sleep. I did it just fine during the infant stages with each of the girls because I was in that season of my life. However, after 3 nights of being up for several hours at a time with a sweet baby girl who can't catch a break from a barking cough REALLY wore me down. Therefore, I slept in & missed my morning quiet time.
We woke up to Internet & phones not working; but that was ALSO a blessing because I needed to do just a few more things before our friends showed up for a Pampered Chef Party. I LOVE having in-home parties...they are SO FUN & I LOVE helping out a local business owner. I also LOVE food....so it was FUN TIMES!!!!! One of my friends brought her little girl & the girls ALL had a BLAST playing.
After everyone left, the girls went down for a nap while I did some relaxing & watched some TV & did some dozing. When the girls got up, we had some thrown-together in less than 20 minutes spaghetti & watched: 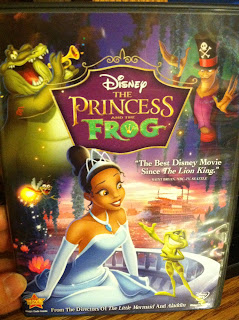 We LOVE this movie!
Then the girls went to bed & I watched: 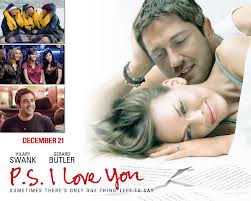 It's GREAT chick flick/tear jerker movie!!!!
Sunday
I was unhappy to wake up with a BAD sinus pressure headache. I KNOW that I don't HAVE to go to church to be a Christian; that it's all about my personal relationship with Him! But He has said we should go & I get SO MUCH out of my Sunday School class & the sermon. PLUS, I love being in fellowship with His people!
So we did A LOT of sitting around first thing....we watched: 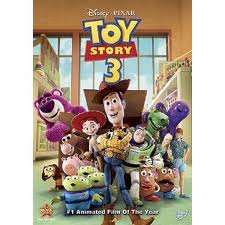 Another one of our FAV movies!
Once the movie was over, I decided to work on some organizing projects I have been NEEDING to do around the house. I wish I would have taken a before picture...but didn't. I am not completely finished with it; but it's DEFINITELY coming along. While I was working on my projects, the girls decided to get out some games to play that don't require as much direct adult supervision. Here are some of what they did: 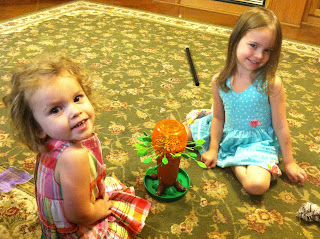 The LOVE this Honeybee Hive Game! 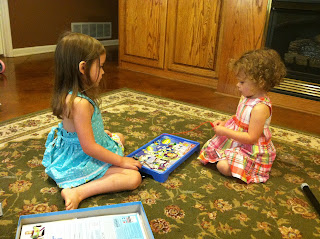 Then it was time for a little Toy Story Operation. 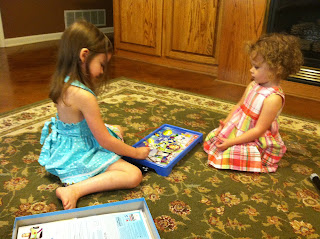 Here Kayla is telling Jamie: Now watch me so you will know how to be a good doctor (cracking me up). 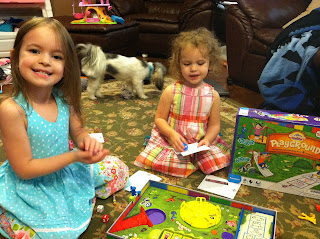 Then they played their version (not EXACTLY in line with the rules but they were playing TOGETHER) of the Cranium Playground game. 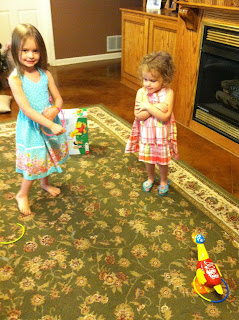 And finally it was time for a little Wacky Duck (without the batteries). The object of this game is to toss the rings around the ducks neck. Well, we have a hard time hitting our target when it's still, so we are trying to master that before making it a moving object (adding batteries).
Since I had been working HARD all morning, I decided while the girls were napping, I would fold some laundry (the basket FULL that always catches the stuff I don't need to immediately hang up to keep from having wrinkles....the towels, socks, & unders) & watch ANOTHER of my FAV movies: 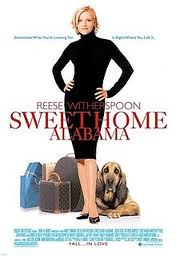 It's just a good movie in my book!
Once that was over, yet ANOTHER of my FAVS came on: 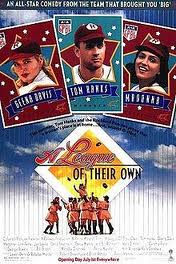 This movie was big one of the years I played softball & our team even made up a song like the song they made up. I don't remember the words now, but I remember we sang it at almost every game.
The girls started waking up while it was on, so I decided I HAD to get back up & get back at it. When our friends came over Satruday morning, they brought Jamie a pair of dress up shoes that had been outgrown. She wore them ALMOST ALL DAY SUNDAY. Here is the picture SHE asked me to take of her in them: 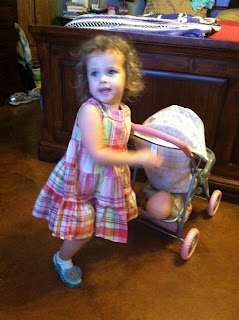 She was cracking me up with the socks on WITH her dress-up shoes.
I did a little more work on my projects, & decided to have some fun with the girls! They were all into their show that had started though, so I decided to do some work with my abs app. OF COURSE the girls decided to join in: 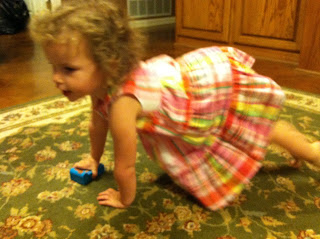 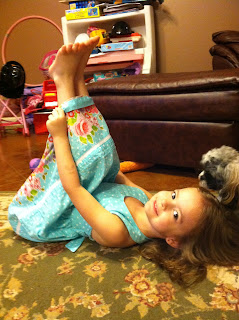 Kayla doing her FAV move: Hip Thrust
Then we decided to do: 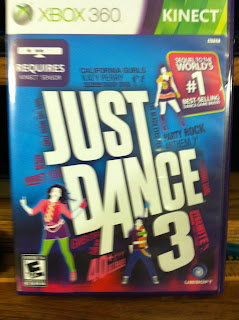 The girls LOVE doing this AND it's an AMAZING workout for me!
After some relaxing & dinner, we got a chance to talk to Nonnie & Pappaw (aka: my Mom & Dad). Jamie was RUNNING around the house with the cordless phone saying look at my this & see that. She also did some singing for them & had been on the phone FOR A WHILE....so I picked up the corded phone in the kitchen. Kayla thought this was SO COOL that we could have more than 1 person in our house on the phone at the same time, so she HAD to get in on the action too! 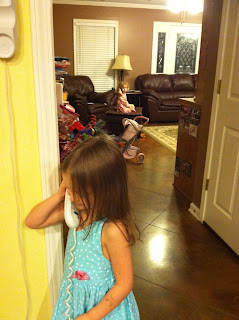 Kayla in the kitchen on corded phone & Jamie in the living room on the cordless phone.
I decided they had TOO MUCH fun without me playing games without me, so we played: 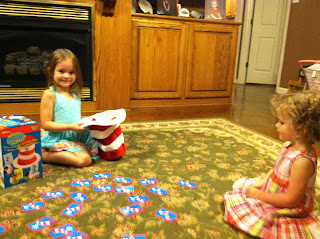 Cat in the Hat....we had LOTS of fun & giggles
After the girls had their bath & went to bed, yet ANOTHER of my all-time FAV movies came on TV, so I watched: 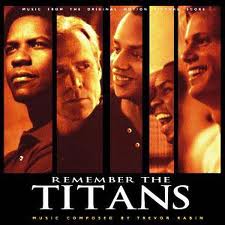 This was the first big role for one of my newest FAV actresses: 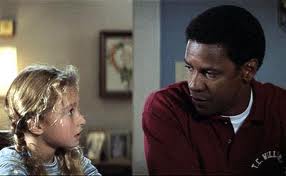 Hayden Panettiere
She has grown up & now has a lead role in a new show: 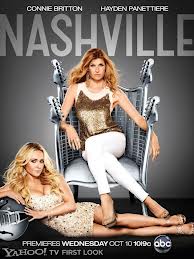 Email ThisBlogThis!Share to TwitterShare to FacebookShare to Pinterest
Labels: Weekend