Another Day of Frozen Stuff from the Sky

So today was another day of frozen stuff from the sky in our area. I had to go into work; but at lunch, the boss (who was duck hunting in AR) called & said to cancel reschedule all appointments for tomorrow as he wasn't sure if he could get back any time today (in case you didn't know, there is a bridge between AR & TN....not good for driving with frozen stuff falling from the sky). Then he told us we could go. Needless to say, my co-worker & I got right on top of that & were out of there by 1:10.
When I got home, the girls were down for nap....so I took advantage of a little down time. 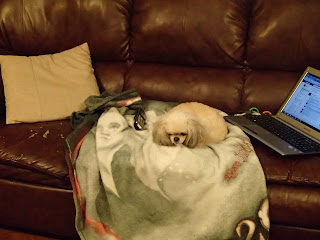 I cuddled on the couch with our oldest dog (the youngest dog likes to sit alone) & the laptop...watching a show & playing on Facebook & Pinterest. 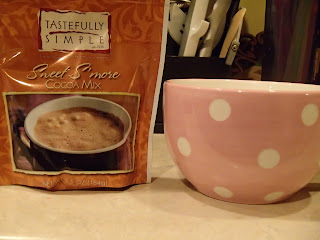 I also enjoyed some Tastefully Simple Sweet S'more Cocoa (REALLY yummy!).
Then the boss (aka: the hubby, since I was at home & all) called & said he was going to try to get home. So of course I became glued to weather watch: 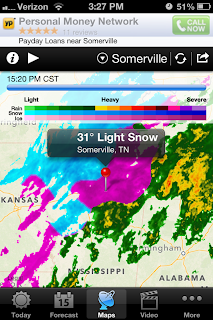 And no matter how much I prayed, I was still a nervous wreck! There was ICE on the roads.
He finally made it home & I was cooking dinner. 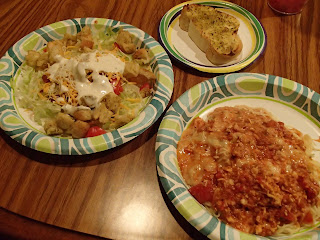 We had Salad with Homemade Croutons, Italian Garlic Toast, & Red Sauce Chicken Spaghetti (click HERE for the recipes).
I also worked on my Daily Chore Chart (those tasks that I do daily that never change). 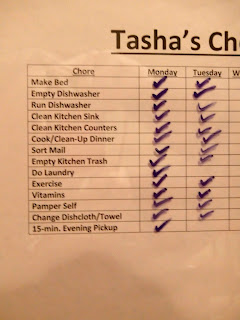 I did a couple of things on my other tasks list, but not too much. After sitting around for a bit, then being so nervous, & cooking dinner, I was just too lazy to get to other things. I will get to them hopefully another day this week. If not...next week looks good.
﻿
Posted by A Sunshine Day at 7:37 PM

Email ThisBlogThis!Share to TwitterShare to FacebookShare to Pinterest
Labels: Frozen Stuff from the Sky