Yes, the old Pull-Ups commercial "I'm a Big Kid now" just ran through my head as I typed that title (what can I say, all songs --even commerical jingles-- stick in my head)!
Anywho!
Do you see that sweet girl right there? 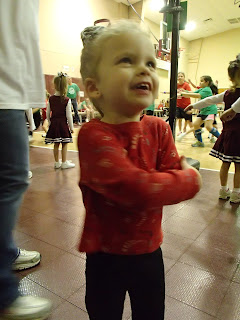 Yea, that one right there!
Even though when she's asked "Jamie, whatcha doin" she says cute little toddler things like "nuppin", she is becoming SUCH a big girl! ESPECIALLY here lately!
Jamie has become my royalty.... 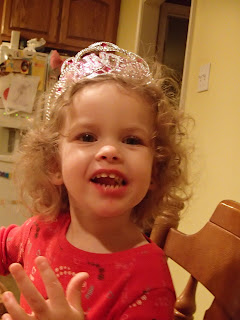 ....of potty training. As I've mentioned before, Kayla was not the easiest child to train. That is TOTALLY my fault for trying to start her so early (like the very minute she expressed any interest at all). So with Jamie, we took the she will potty train whenever she is ready. And she took no time at all. We did little incentives for her (M&Ms & Skittles), but she didn't even want them every time (& this girl LOVES some candy). I can't tell you the last time she had an accident.
As those of you who follow me consistently know, we've been working with her on her colors. She knows them, but is either too distracted or being too silly (I can say this cause she laughs about it) to say the right color at times. When she can consistently get them, she gets to go on a Daddy/Daughter Date: dinner & a movie or special activity with just him & her.
We'll last night she added another step toward becoming a big girl..... 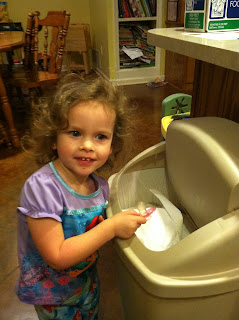 ....she threw away her paci AND was EXCITED about doing it (dancing all the way). We had talked to her about throwing it away on her 3rd birthday & she was talking that up & ready for it. But if you look really close at that picture, you can see she has a little red bump on her chin. It appeared there about a week-and-a-half ago. It is not a pretty little bump, at all. We've been putting stuff on it but it just won't clear up get any better.
So we tacked on you aren't completely a Big Girl who can go on a Daddy/Daughter Date until you stop sucking your paci. And just like that, she went to her room, got her paci, & threw it away after she had gotten into her jammies.
Her solution: I'll just suck my thumb. I realize she's still sucking on something, but she'll quit that too in her time. Kayla quit sucking her thumb (she would never take a paci) when she wanted to start getting her fingernails painted.
﻿
Posted by A Sunshine Day at 2:24 PM

Email ThisBlogThis!Share to TwitterShare to FacebookShare to Pinterest
Labels: Parenting